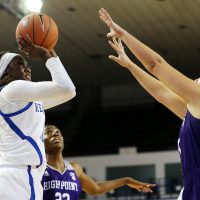 ukathletics.com- Rhyne Howard a native of Chattanooga, Bradley Central alum and University of Kentucky freshman guard has been named the United States Basketball Writers Association National Freshman of the Week for her strong performances last week in UK’s wins over Western Carolina and Murray State, it was announced Wednesday.

Howard, who has won Southeastern Conference Freshman of the Week honors four times this season, is the first UK player ever to win national freshman of the week from the USBWA, which started honoring the top rookie each week in 2014-15. She is the first UK player to win a weekly honor from the USBWA since Jennifer O’Neill was tabbed national player of week in December of 2013.