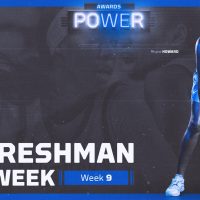 Howard leads Kentucky this season in scoring and rebounding with 17.4 points and 7.0 rebounds per game. The guard ranks second on the team in assists with 45, steals with 38 and blocks with 16. Howard has scored 20 or more points five times this season, including a season-best 29 against Southern where she tied a school record with seven 3-pointers made.