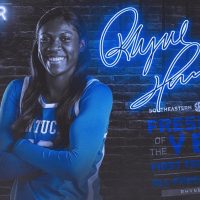 ukathletics.com – Rhyne Howard has had one of the best rookie seasons in program history, leading the team with 16.0 points and 6.7 rebounds per game while sitting tied for the team lead with 68 3s made. The rookie ranks second on the team with 65 steals and 70 assists while her 21 blocks ranks third. Howard won eight SEC Freshman of the Week honors this season, which broke the league record for most honors in a year.

The native of Cleveland, Tenn., is currently fourth among freshman nationally and first in the league in points per game while she is the only freshman in the nation with 460+ points, 60+ 3s made, 60+ steals and 70+ assists. Howard ranks top-five in program history for freshman in points, points per game, rebounds, rebounds per game, field-goals made, 3s, 3PFG percent, steals, double-figure scoring games and double-figure rebounding games.

Full article can be found here.