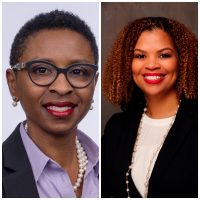 “We are so pleased to have both Val and Darlene expand their roles at American Water,” said Walter Lynch, chief operating officer at American Water. “Val has been a true leader here in Tennessee since becoming president in 2015. She also has a long history of participating in the public process as the first woman and youngest president elected to lead the local chapter of NAACP from 2005 to 2012. We are excited to have her lead our national government efforts and further strengthen our relationships with leaders across the states we serve.”

“We are also pleased to have Darlene join the Tennessee team,” added Lynch. “She has been leading field operations in one of our largest states for the past two years. In this role, she led a large team to meet the needs of more than 300,000 people with critical services around water supply, quality and infrastructure, as well as customer service. She is passionate about our focus on the customer experience and in building collaborative teams.”

Prior to Williams’ field operations role in New Jersey, she served as executive projects coordinator, dedicated to the offices of the chief executive officer and chief operating officer. In that role, she supported strategic initiatives that helped advance American Water’s organizational effectiveness and performance results. She also served as president of the American Water Charitable Foundation, a 501(c)(3) nonprofit organization. The mission of the American Water Charitable Foundation is to demonstrate American Water’s commitment to being a good neighbor, citizen and contributor to the communities where the company and its employees live, work and operate.

Earlier in her American Water career, Williams served as director of Operational Education and was responsible for planning and executing the corporate operations learning strategy for workforce education. She led a team of people who worked closely with employees around the company to deliver training on water and wastewater operations, software applications, customer service and safety procedures.

Williams has more than 25 years of experience planning and executing high-value projects and building client relationships at all levels of an organization with a focus on alignment and consensus among stakeholders. She holds a bachelor’s degree in marketing from Florida State University and a master’s in business administration from Nova Southeastern University.

Next
The Morning Hustle