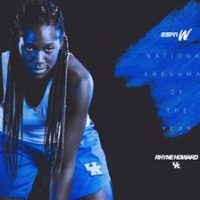 ukathletics.com – After the best rookie season in program history, leading the Wildcats in scoring, rebounding and 3-point shooting while sitting second in steals, University of Kentucky women’s basketball guard Rhyne Howard has been named the espnW National Freshman of the Year, it was released Friday.

Howard becomes the first player in program history to earn a national freshman of the year honor. Earlier this month, Howard was named the Southeastern Conference Freshman of the Year by league coaches and SEC Newcomer of the Year of the Associated Press. She was also named first-team All-SEC and SEC All-Freshman Team by league coaches while the AP named her second-team All-SEC.

All the postseason awards are on top of Howard being named SEC Freshman of the Week eight times this season, setting the program and league record for most rookie of the week awards. The SEC honors came on Nov. 13, 27, Dec. 11, 23, Jan. 8, Feb. 12, 19 and 26. She was named National Freshman of the Week on Dec.  26 by USBWA, the first player in program history to accomplish that feat.

Howard is the first UK freshman in the Matthew Mitchell era to score at least 10 points in each of her first 10 games. She ranks first on the team in points per game with 16.3 and leads the squad in rebounds with 6.7. Howard is second on the team in steals with 64, third in assists with 70 and tied for first in 3-pointers made with 68. She has scored in double figures in 24 games with 20 or more points in nine games and five double-doubles.

Howard ranks high in the league in several categories sitting eighth in field goals made, 11th in field-goal percentage, seventh in points, seventh in points per game, fifth in steals, sixth in 3-pointers made, fifth in 3s made per game and fifth in 3-point percentage. Howard is the only freshman in the country with 480+ points, 60+ 3s, 70+ assists and 70+ steals while she ranks third among freshmen nationally in points and points per game.

During conference play, Howard had a four-game stretch of scoring 17+ points with 19 points and five 3s against Auburn before 23 points and four 3s vs. Alabama. She had 18 points and 14 rebounds against Arkansas, hitting the game-winning shot with 1.3 second left and then getting a steal to clinch the win. In Kentucky’s win at top-15 ranked South Carolina, Howard had 17 points with four rebounds and three steals. Last week in the SEC Tournament, Howard scored 21 points after halftime to charge a UK comeback against Missouri finishing the game with 11 made field goals and 25 points.